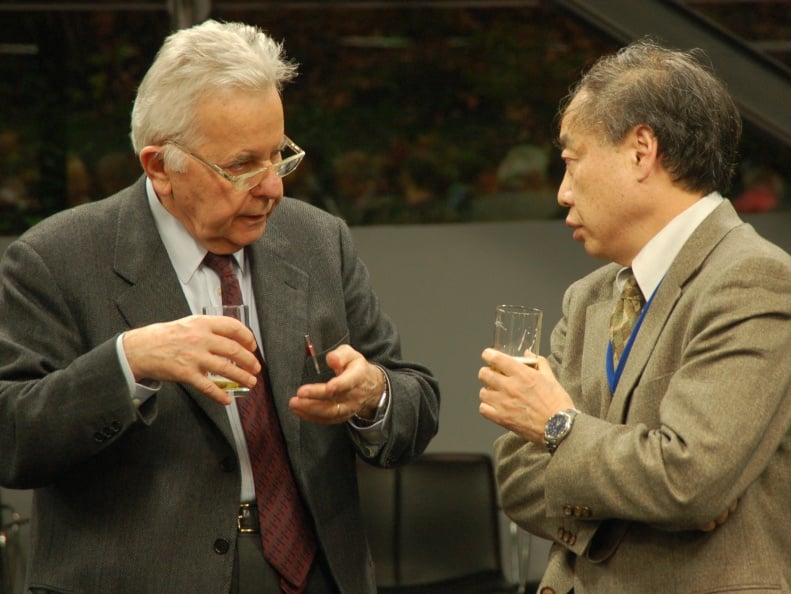 A story written by Storie Scientifiche for CREF.

In the vast world of elementary particle physics of the last fifty years, both nationally and internationally, resonates an important name, that of Nicola Cabibbo.

Born in Rome in 1935 to a family of Sicilian origin, from an early age he developed a great scientific curiosity and a love for reading science fiction. These passions pushed him to enroll, in 1952, in the physics degree course explaining that “Physics then was the absolute queen of science, with the discovery and domination of the nuclear world”. His teachers were some of the brightest minds around: Edoardo Amaldi, Marcello Conversi and Bruno Touschek. He graduated in 1958 with a thesis on the decay of muons, having as supervisor Touschek, and immediately became a researcher at the National Institute of Nuclear Physics (INFN) in Rome.

Towards the beginning of the sixties Giorgio Salvini, who had just achieved the feat of establishing a National Research Laboratory and the construction of a particle accelerator, created in Frascati a group of theoretical physics that was intended to support experimental activities. Cabibbo became the first employee of this theoretical group starting to collaborate with a young man who had just returned from the United States, Raoul Gatto.

In the same years Touschek proposed and designed the construction of the first particle-antiparticle accelerator named AdA (Accumulation Ring). In this ring electrons and their antiparticles, positrons, travel with the same speed in opposite direction annihilating themselves and transforming the initial energy in new particles. Cabibbo wrote an article in 1961, that his colleagues immediately called “the Bible” because it contained the theoretical calculations of all the cross sections of the electron-positron annihilation processes then conceivable.

The following year he moved to Geneva to assume the role of researcher at CERN; after only one year he moved to Lawrence Berkeley National Laboratory, in Berkeley California in what was the world center for the study of particles, and then returned again to Switzerland.

It is in this period that he published in the journal Physical Review Letters, which in 2006 was rated as the most cited study of all time among the publications of the American Institute of Physics, the work that will make him famous within the scientific community: “Unitary Symmetry and Leptonic Decays”.

Here will appear the definition of the angle that will be renamed, in his honor, Cabibbo angle. He hypothesized that the force, or weak interaction, mixed with strong interaction (two of the four fundamental forces that govern the universe) in the so-called Cabibbo Mixing and that this process was regulated by Cabibbo angle. Its trigonometric values, in particular the sine and cosine, establish the probability that a strange particle will turn into a non-weird one by interacting with a third particle by means of the weak force. This work paved the way for understanding weak interactions.

Exploiting Cabibbo’s work, the American physicist Murray Gell-Mann (winner of Nobel prize for physics in 1969 “for his contributions and discoveries in the field of classification of elementary particles and their interactions”) hypothesized the existence of up, down and strange quarks, also predicting that they could come in three different “colors” and “flavors”. Actually the color charge is a property of quarks related to strong interactions, property described by quantum chromodynamics (QCD, acronym inspired by English translation of theory). This quark model was immediately used for the theorization of a fourth quark (charm) by physicists Glashow, Iliopoulos and Luciano Maiani.

In 1973 the Japanese physicists Makoto Kobayashi and Toshihide Maskawa proposed a generalization of Cabibbo’s work. The two hypothesized the existence of a third family of quarks and introduced a unitary matrix (matrix CKM, from the initials of the three physicists) thanks to which it was possible to calculate the probability, through nine parameters, that a quark “transformed” into another during a weak interaction process. With the help of the CKM matrix, among other things, it was possible to fold the violation of the fundamental CP symmetry, which is the union of two symmetries, that of the exchange between particles-antiparticles and that of the inversion of spatial coordinates (invariance under Parity).

Cabibbo’s work has allowed to understand where to look for the reason of existence of things: in the mixing of quarks. He himself said:

“Today to describe everything we know about the elementary particles of the Universe we need 20 parameters. Eight of these describe mixing and are directly related to the angle that bears my name.”

The awards received have been countless, we only mention the Enrico Fermi Award in 2003 “for his theory of mixing down and strange quarks in weak decays, in which plays a fundamental role the well-known parameter, called Cabibbo angle”.

However the most coveted recognition did not arrive. In 2008 Kobayashi and Maskawa received the Nobel Prize for Physics “for the discovery of the origin of the existence of at least three families of quarks in nature”. A special guest is missing, the one who laid the foundations, who carried out the first works; Nicola Cabibbo’s name is missing.

Roberto Petronzio, at that time president of INFN, says “I am happy that the Nobel Prize has been attributed to this field of physics, however I cannot hide that this particular attribution fills me with bitterness”. The entire Italian community is stunned, but not only: the New Scientist titled an online article that can be translated in this way “The Nobel Prize for physics snubs a key researcher”.

Il Sole24 Ore, on November 26, 2008, published an article in which one of the two winners, Toshihide Maskawa, responds in this way to the astonishment born in Italy for the missed assignment to Cabibbo:

“I premise that this is a question that would be better addressed to the Committee of the Academy that assigns the Nobel but Cabibbo formulated his studies in 1963, but before him this question has been studied for a long time and to these priority studies I have referred in a particular way”.

The reaction of the Italian physicist was calm but not without regret: “I prefer not to make statements”.

In the photo Nicola Cabibbo in the company of Makoto Kobayashi.